The 1989 unsolved homicide of Craig Lane. 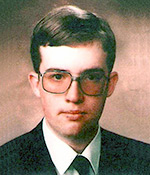 Year of Death or Disappearance: 1989

Craig Lane, age 17, was working at the Texaco Station on Route 202 in Peterborough when he was killed during an apparent robbery. The robbery took place at approximately 5:30 p.m. on January 8, 1989. The assailant stabbed the victim and stole money from the gas station. Customers saw a person fleeing the scene at the time. The person was identified as a white male in his later teens to early twenties, approximately 5'10" tall, slim to medium build, with brown medium-length hair, wearing a red jacket with a blue stripe around the chest area, blue jeans, and a dark baseball cap. A composite sketch of the suspect is below.