The 1977 unsolved homicide of Jaclynne Snyder 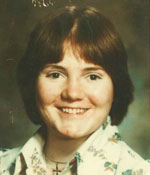 On September 14, 1977 at 11:30 a.m., the body of Jaclynne E. Snyder, age 22, was found on Route 155 in Lee, NH. Jaclynne who was originally from Spokane, WA, was visiting Portsmouth when she was reported missing about a week and a half earlier. Jaclynne was last seen leaving the Strawbery Banke area of Portsmouth, NH shortly before 4:00 p.m. on Sunday, September 4, 1977. She was wearing a short sleeve shirt, which was white with dark blue checks, dark blue jeans, and brown shoes. She was carrying a small dark blue day pack at the time. An autopsy was unable to determine the precise cause and manner of death because of decomposition, but Jaclynne's death has been treated as a homicide.